I have decided to develop a chess engine and keep a diary of the process from the very start and what better way than using a blog! I have written a chess engine before, but it is very weak and nothing to be proud of. It does beat me, but not consistently.

Every chess engine needs to have a name. I am going to call my engine Vicki. Why Vicki? Apart from being a girl's name and containing the letters 'c' and 'i', which could stand for the words 'chess' and 'intelligence' in an acronym, I have no particular reason. But, I do like it.

My expectations of Vicki in the following year are as follows:
I have decided to use C as the programming language. Few languages can keep up with C's speed as it is very close to the hardware (I do not buy the Java is faster than C arguments).

I am famous for always starting projects from the wrong ends. So here's the logo for a chess engine that's only consists of ideas at the moment! 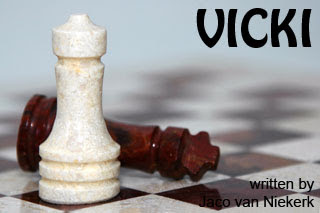 The photo was taken by my talented wife who is a professional photographer. Please visit her website.

The text is my own creation. I like the simplicity of the logo. Rather silly to have a logo without a chess engine - so let me start coding!

[Edit: Removed the version information from the logo.]
Posted by Jaco van Niekerk at 00:04

Welcome to my blog!